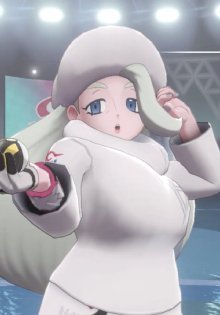 Melony was the character introduced in Generation VIII of the Pokemon series.

The pokemon is derived from the Japanese name of it the pocket monsters. The show had been able to gather immense success and fandom. The series has many spin offs which itself it an indicator of success. The show also has its character on various merchandise. The show was aired in April 1997. In the original series, the story revolves around Ash who is a ten year old boy who is excited to get his first ever pokemon.. he although over slept that day and reached their late. The story continues to many adventures and games that they endure. Pokemon is a brand itself. . She is the Gym Leader of Circhester and has expertise in Ice-type Pokémon. Although She can only be fought in Pokémon Shield— in the Pokémon Sword.

Later, her own son named Gordie replaces her as Gym Leader even though he had specialised in Rock types instead of Ice types. Melony’s uniform number is seen to be 361 which can be read as “sa-mu-i,” – “samui” being Japanese for “cold”. Co-incidence? Not so much I guess. Alike most of the characters in Sword and Shield, Melony is named after a plant. However, it can also be inferred that it is derived from “melody” – as Gigantamax Lapras has a music theme in its design or the word “melancholy” – an emotion commonly associated with winter which also means sad.

How does Melony look?: Melony Pokemon

Melony Pokemon is a large and a plump woman with fair skin, she has blue eyes, and has slightly painted fingernails. She also has a voluminous light grey shade of hair, he hair fall to her hips, along with a greyish-blue streak and a single unruly bang. For her attire, she wears very thick clothes that would protect her from cold weather. She wears a white turtleneck sweater with the Ice-type and it also has Gym Challenge symbols on it. Her outfit also consists of a puffy white scarf, and a large white wool hat. She wears a blue-grey colour tights with white patterns and white shorts with some sort of black design, it also has her Gym number, and the Ice-type symbol on them. To complete her outfit, she wears long white boots and a white and black glove on the right hand.

Melony is usually a sweet lady , just what anyone would anticipate hearing her name. In terms of her Gym, however, she is really rather calm and reserved. She trains herself in a very disciplined and strict way analogous to the Spartan method, and it is often speculated that her battle style is actually influenced by a bicker she had with her son, Gordie.

However, Melony is a sore loser. She doesn’t seem to take losing well. There have been instances when she is defeated in battle, she talks about how she apparently wants to crawl in a hole.although Melony is a lovable and a popular character from the series.